Marymoor Park
Do you ever wish you could just hop on a bike and cruise the town? You know, like you see in touristy pictures from Europe--people biking without any particular goal in mind as they peddle, breathing in the fresh air, and living life at a different pace for a change. Well it's not Europe, and it's not as far away either, but Marymoor Park in Redmond lets you do just that.
If you've been to the Marymoor before, you know how expansive the park is with 640 acres of recreational activities. They've got rugby, soccer and football fields, playgrounds, a stage for concerts...this blog post will cover only a few of the many of things to do at Marymoor Park by bike.
Details on the Bike Program
The Marymoor Bike Program is sponsored by Dasani Water, and essentially lets you borrow one of the park's 20 or so bikes to ride around the grounds, on the trail, or cruise through town.
We first discovered the bike program about a year ago while looking for something new to do one weekend that was still within our budget (preferably free.) We found it by looking through the parks on the King County website. Little did we know we had just stumbled across a jackpot of fun. Because of these bikes we've gotten to explore so much around Lake Sammamish that we wouldn't have otherwise seen. 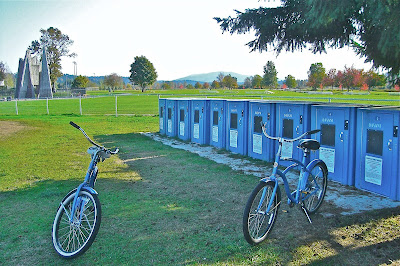 The bikes we borrowed at Marymoor Park through their bike program; we're all set to go after taking them out of the Dasani sponsered lockers

The Logistics
To have access to the bikes, all you have to do is fill out a form, take it to the park office, and bring a helmet to use. (Find that form here.) Then you'll be given a card with a magnetic strip, like a credit card. This card will allow you to come back to use a bike anytime you want. Next, track down the lockers located near the velodrome that's for track cycling. Swipe your card, take out your bike, and you're all set. Do be sure to check the tires for enough air before you take off.
Let the Adventure Begin...
It was at this point that we realized just how many options there are for biking in this area and how much there is to see. We've biked on the East Lake Sammamish Trail in the past, so on our most recent visit we decided to stay in the park. We started off by riding over to the rock climbing walls and admiring the towering cement cliffs. It looks like a rock climber's dream with such a variety of faces, grips, and angles. This is definitely not for the faint of heart. 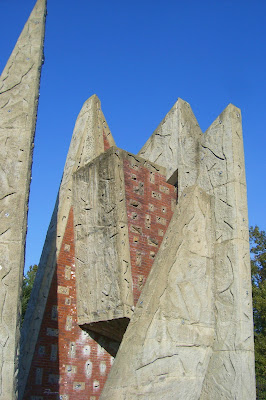 Outdoor rock climbing walls at the park with lots of variety

The Bikes
We hopped back on our bikes and rode toward the park's main entrance to a windmill we'd seen on our way in. These bikes are a beach cruiser style and are surprisingly comfortable to ride with their cushy wide seats and taller handlebars. One of our favorite parts of riding them is they have the classic back-peddle brakes and are fixed-gear so you are indeed cruising. We did test them out though and they do handle quite well on the grass because of their wider tires. 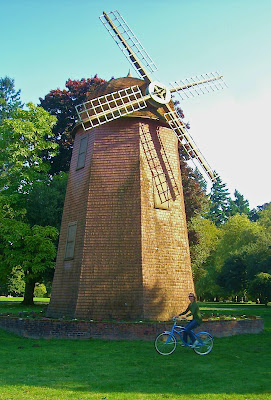 Passing by the beautiful old windmill at the park

The History of the Windmill and Mansion
We curved around on the trail, passed the park office, and headed toward the huge Dutch-inspired windmill. We learned from the park's website that way back when, Marymoor Park used to be the Willowmoor Farm and country estate. This windmill is one of the remnants that you'll find around the park from the old estate. Apparently it never served as a functioning windmill.
As you continue on the trail you'll see the Clise Mansion on your left. We love pieces of history like this...James Clise was a Seattle banker who bought the estate back in 1904 to use as a hunting lodge. Gradually over the years, the lodge grew to be a 28-room mansion. Clise used the farm to breed Morgan horses and Scottish Ayrshire cattle but then sold the estate in 1920. After several owners, the farm became known as Marymoor, after the farm's operator's daughter. The land was going to be sold for development in 1959, but King County Parks bought it and here we are.
Today, the Clise Mansion is used for tons of events including weddings. If we hadn't already had our wedding this would have been one of the top venues on our list, if we only had known about it. It's actually affordable, by wedding standards anyway. If you are making plans to get hitched soon check it out. 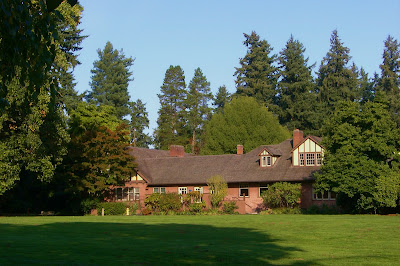 The Clise Mansion in afternoon the sunlight, surrounded by grass fields and century old trees

Dog Park and Doggie Washing Station
After enjoying the mansion we were on our way to the 40 acre off-leash dog park, which twists along the Sammamish River. If you have a water dog there's lots of dog swimming area as you make your way along the trail.
As we continued riding we found that right next to dog area is a doggie wash station called Wash Spot. Yes a dog grooming business in the park, the perfect place to clean up your dog after Rover goes for a swim and rolls in the dirt or gallops in the mud. It's a self-serve dog cleaning station created by the park system. They charge $9 for the basic 8-minute dog wash and the prices go up from there. There are large glass garage doors so you can look in on the operation of dirty dogs becoming spotless pooches. Oh yea, if you need some coffee, there's also little espresso stand by the dog park entrance; apparently the dog area is popular enough to sustain some business. 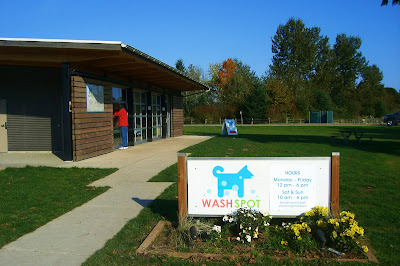 Community Garden
It doesn't stop there. As we continued riding we reached the community garden at Marymoor; it was just lovely in the October sunlight. This pea patch is run by community members and allows people to rent 10ft by 40ft plots of land to grow flowers, vegetables, raspberries, corn...pretty much any kind of produce you can imagine. We enjoyed walking through it and seeing how each individual plot was different from the last. People really take the plot on as if it were their own backyard by adding trellises, decor, fences--it was all very impressive. The gardens are in operation from April through October every year. To learn more visit http://marymoorgarden.org/. 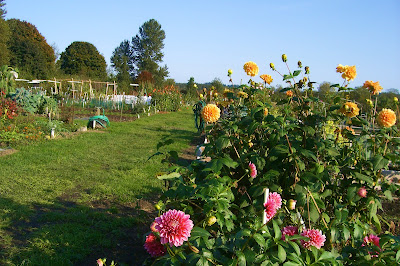 The community garden at Marymoor Park--rent a piece of land to grow anything you want--well, almost anything

The R/C Air Field
Our last destination was the radio control air field in the park where the Marymoor Radio Control Club members practice flying their model airplanes. The field is huge and the best part is the big open sky above that allows the planes to buzz around. The operators are very good and will put on a quite a show by making their planes soar up, do flips, dive-bomb, fly upside down...it's a little like watching the Blue Angels on a smaller scale. 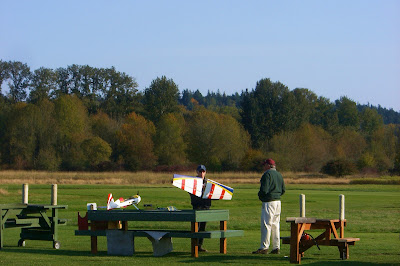 Wrapping Up
When we were all done we rode the bikes back to the lockers, swiped our cards, and put the bikes away. It was as simple as that.

There's so much more that we didn't cover in this post, but that's for you to discover and enjoy. 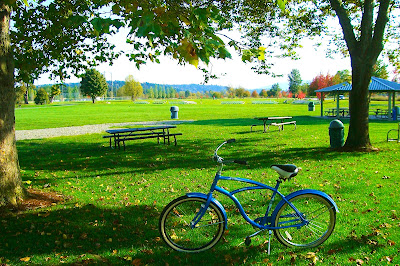 It's a cheap, fun way to spend an relaxing afternoon

Have a great ride!
Head on out Around Puget Sound...and Beyond
Posted by Maresa at 4:32 PM